Thank you for visiting our web site!

OLIVER SPECIALTIES, INC. was established in Detroit, Michigan by Jim Meredith, the father of the current owner, Barb Meredith, in 1951.

After working for another well-known calendar company, Jim went out on his own, representing manufacturers of a wide range of ad specialties and imprinted promotional products.

He also established a number of successful direct mail co-op programs which are sold to this day.

In 1980 Barb joined her father in the business, starting out as his office assistant typing orders, calling suppliers, and handling customer inquiries.

In 1987, Barb decided to move to Traverse City, Michigan, a resort town in the northwest section of the lower peninsula of Michigan, where one of her siblings lived and where her entire family vacationed for decades.

She took with her the direct mail programs, while her father continued to call on his local long-time customers. Eventually, a client base was also established in Traverse City, and in the early 1990s, Jim offered Barb the opportunity of buying the business.

Although she owned the business from the early 90s, Barb and her father enjoyed several additional years working together ... and though 250 miles apart, they communicated in some way every day.

Jim passed away in the fall of 2001. Barb continues to operate Oliver Specialties, using the knowledge learned from a salesman of the old school who believed in customer service above all else. 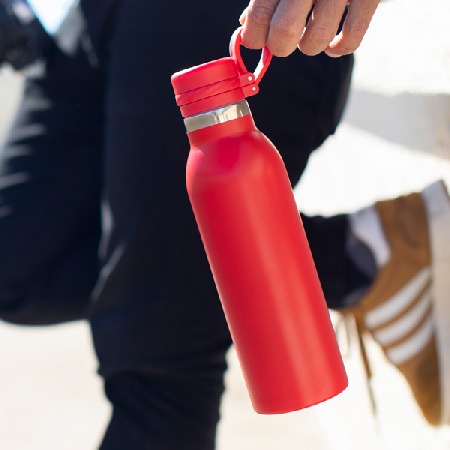 Drinkware is the biggest seller!

Last year, and so far this year, drinkware is the biggest seller and the best way to show appreciation to customer, employees, and as gifts to those health care workers keeping us safe!

The Relay is a 20 oz. stainless bottle with vacuum insulation, and in six colors plus white.  Gift boxes, and the minimum is just 48!